Home/ News/ HIS CUP OF TEA

HIS CUP OF TEA 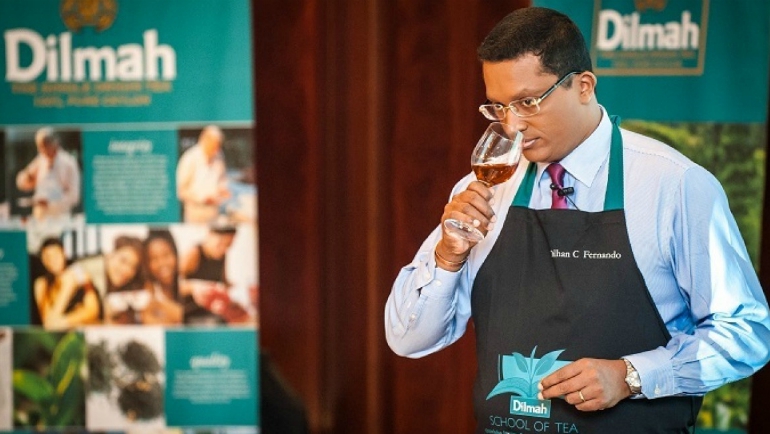 It has been 70 years since Dilmah Tea was founded by Merrill J. Fernando. Today, his son Dilhan C. Fernando has taken over the running of an empire that is steeped in quality, history and has changed even the way we drink tea. In this interview, the CEO talks about his early years and the lessons he learnt from his father.


If man has no tea in him, he is incapable of understanding truth and beauty. — Japanese proverb

That saying definitely describes Dilhan C. Fernando, CEO of Dilmah Tea, the global Sri Lankan family tea producing business. Fernando and his older brother Malik now run the tea empire started by their father Merrill J. Fernando in 1950 (the name Dilmah was chosen by combining the first names of Dilhan and Malik). This year is a milestone for the brand: The company is celebrating its 70th anniversary while the family patriarch turns 90.

Growing up around the tea business has certainly rubbed off on the young Fernando. As he waxes lyrical about tea, he talks about the health benefits — at times likening it to wine growing and wine appreciation. His passion comes across clearly all the way from Sri Lanka during a recent video interview with Options. Fernando says: “[Tea] is a beautiful, natural herb that is not only prized for its medicinal value but a lot more. Go beyond and see how tea becomes relevant to our lifestyle today whether in food at a functional level or in food on a sensory level, in drinks and so on.”

All he wants to do is share his vast knowledge of tea with everyone. After all, on a normal week he and his team taste a total of 10,000 types of tea. That clearly qualifies him to understand the complexity, character and variety of each. He says that you have to understand the connection between the intensity of the sun and the soil, the woody character that comes from certain climates and the maltiness of it.

If tea is not mentioned, you would think he is talking about wine. “If you take the alcohol out of it, it could be similar. The only difference is that whilst in wine you have so many different varietals. Here in tea, you only have one variety, the Camellia sinensis,” he says. Camellia sinensis or tea shrub, plant or tree use the leaves and buds to make tea.

Fernando continues that should you plant that same shrub in Darjeeling — which is a tea growing area in India’s West Bengal state — or in Nuwara Eliya or Galle, in Sri Lanka, a different character emerges because of the soil, the heat and humidity. “It’s not that you have so many varieties, you only have one. For us, we call ourselves tea makers, but we do very little tea making; nature does the making,” he says.

The task of a tea maker such as himself is simple: All he needs to do is explain to people how to make that perfect cup of tea. The first step is to understand on a sensory level how you appreciate tea. Then it moves into food, beverage, moods and lifestyle. He feels that knowledge inspires passion and that is one of the reasons why the Dilmah School of tea was set up.

It is the first international school of tea, with sessions in Sri Lankan capital of Colombo and in partnership with the Institute Paul Bocuse in Ecully, France. His desire is to share the pleasures in tea with a new generation of drinkers that saw the birth of the t-Series, designer gourmet teas (www.teatimerocks.com) and an entirely contemporary approach to marketing the traditional beverage.

The company has also started Sri Lanka’s Sustainable Development Goals (SDGs) through MJF Charitable Foundation and Dilmah Conservation. It seeks to develop and implement conservation initiatives that are novel and timely, maximising efficiency in the utilisation of resources and efficiently addressing biodiversity and environmental concerns, while leading community-driven projects.

In short, the aim is to serve the poor and help those who are less privileged and marginalized that lie close to the heart of the founder of Dilmah Tea. It also played an integral role in his business vision, throughout his working career.

If anyone knows what it means to be marginalised is Merrill J Fernando. He dedicated his life to tea in the 1950s when he saw the concentration of ownership in the tea industry in the hands of a few large corporations. This was leading to the commoditisation of tea.

The early years were the hardest, says the younger Fernando. His father faced discrimination when he wanted to start his own tea company. He remembers: “It was a different time back then. [My father] and his colleagues were told they don’t have the palate for tasting because they eat too much curry. But that did not deter Merrill, he witnessed Sri Lanka’s tea, at that time Ceylon tea, being taken across to London. He saw that the tea industry was extractive capitalism, one where the country wasn’t benefiting. There was no investment in the future, no investment in innovation.”

His father’s experiences taught Fernando and his brother valuable lessons in life and in business. He taught the boys about commitment, about upholding principles, his father said if you give your word, you stick to it, “whether it’s 30 years or 50 years or 100 years”. This lesson in integrity stems from a passion and a devotion that consumed Merrill’s entire life. He saw inequality and exploitation in the industry back in the colonial days.

The patriarch is still very much involved in the family business. Fernando says that just the other day his father was questioning him about certain aspects of the Foundation and he made sure Fernando sees the project through. In fact, his father makes it a point to lead by example. Fernando says that dinner conversations growing up would always centre on the business. It did help that his father discussed work issues with them, the good and bad. “I’m speaking for my brother too, it was very much seeing my father struggle, he was knocked back so many times and it took him 38 years from the time he started in tea, until he achieved his dream of starting a brand.”

In 1950, a 20-year-old Merrill began his tea journey and for 40 years he fought fierce opposition as he pursued a vision that no tea grower then had dared to dream: To sell directly to the world. In 1968, he formed the Merrill J Fernando Company, the first step in his mission to establish his own tea brand. Finally, in 1988 he launched Dilmah and for the first time, tea was handpicked, hand made, branded and offered directly to the world by a native tea grower.

Today, the Dilmah headquarters is situated in Peliyagoda — a town in the western province of Sri Lanka — with 300,000 sq ft of built up space on four acres. The company employs 1,200 people. There are also more than 70 advanced tea packaging machines and stringent quality assurance standards are employed to consistently provide the finest cup of tea.

Dilmah is the only fully vertically integrated tea company with ownership of some of Sri Lanka’s finest tea gardens, modern factories, printing and packaging facilities and investments in every segment of the tea industry. MJF Holdings is the parent company of several businesses that have grown around Dilmah Tea, which are listed on the Colombo Stock Exchange. Fernando says that in the early days, his father “was kicked around a lot”, containers of tea were returned with a message “this is a dirty product as it is from a third world country”. Yet his father kept going and never gave up. “What my brother and I saw was a man with incredible determination”.

Another important lesson his father taught him is humility. Fernando cites an example that when he returned from the United Kingdom with a degree from the prestigious London School of Economics, his father looked at his degree and said it meant nothing. Fernando recalls: “My father said, ok you passed. Now put that degree in your bottom drawer and go to the factory and start work. He paid me the equivalent of about Singapore 100 dollars a month.”

The experience taught him well as Fernando understood that his father wanted him to fully understand and appreciate the business from the ground up.

Will Fernando dish out the same kind of tough love to his 19-year-old son? His reply is a very swift “absolutely”. “Actually, no. He’s probably more pragmatic than I ever was.” His son is back home from his studies in the UK because of Covid-19 travel restrictions. The proud father said that unbeknownst to him his son went to work as a waiter at one of the cafes owned by Dilmah Tea, t-Lounge. “I was absolutely thrilled hearing the news because he told me nothing. I found out when the head of the café called me to inform me that my son asked for a job,” he says.

The pandemic has also forced Fernando to look at his business differently. While the core business and its values will remain the same, he adds: “We will continue to do what we’ve been doing but we will do it in a slightly different way. The challenges of 2020 have heightened people’s awareness of the importance of consuming products that are good for you. And in the case of tea, it has a potent level of antioxidant.”

Tea is natural. It is uniquely rich in antioxidants and it has a wide variety. To him, that combination of functional health benefits and wellness ability give the company a way to integrate tea with people’s moods with their lifestyles. Fernando adds that they are looking at ways to combine tea with health — turning to Sri Lanka’s rich Ayurvedic tradition, a holistic healing system that began about 3,000 years ago in India with roots in Greek and Roman traditions.

An example is to combine tea with cinnamon, black pepper and turmeric that are grown on their plantation. By combining tea and its antioxidant goodness with many of these different ingredients, he wants to explore further his tea infusion collection which has won them the title of Winner Tea Category, which was done through a survey of 10,000 people by Nielsen this year.

Another range he is looking at are Chai, or teas brewed with herbs and spices. Unfortunately, Fernando says that a lot of Chai teas are simply powdered milk with sugar and flavouring. “That’s sad because Chai is a method of delivering health and wellness. In ancient times our kings would use Chai as a pleasant way of administering the natural goodness found in cardamom and star anise. We want to give consumers the original Chai.” Fernando admits that they cannot compete with the huge brands out there. But one thing is for sure: He promises to do his best to tell a unique story that will resonate with his consumers.

This article was taken from The Edge Singapore