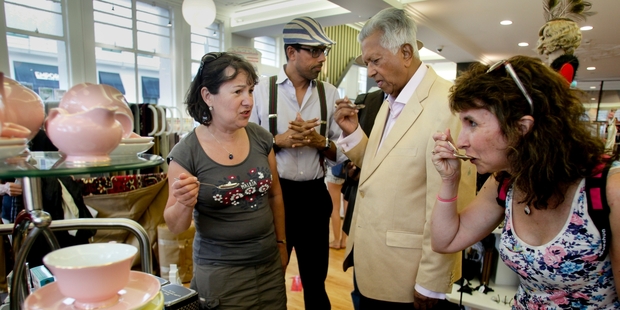 It was more than fitting that the first stop in Napier for the Tremains Art Deco Festival's international ambassador Merrill J Fernando would be the Art Deco Centre in Tennyson St where a dapper hat and cane were quickly offered his way.

It was equally fitting that the founder of Dilmah teas brewed up a few cuppas of his finest leafy offerings for the many customers circulating through the centre's shop, and outside the main doors after seeing him and his family arrive.

His sons Malik and Dilhan and their wives also made the journey to Napier for the great festival.

"We [he and his brother and father] had such a good time there last year we felt we had to have the whole family together for this."

Dilhan Fernando said there was "no equivalent" to the great festival anywhere in the world. "Because it takes everyone in - all the families - the little children even get dressed up and it becomes such a happy and extraordinary event."

He said spotting a couple doing an impromptu Charleston in the street after he had left an event at the Sound Shell summed it up.

"It is non-stop fun and it all comes from the heart."

With a laugh he said his ambition was to have a shot at the Soap Box Derby and said he hoped the deco attire they had brought with them would be up to scratch.

They were a little late in arriving as their rental vehicle had a tyre problem just out of Wellington but after a smooth and tasty cup of tea it was all soon forgotten.

"It is just great to have them back with us again," Art Deco Trust general manager Sally Jackson said.

Merrill J Fernando said he was proud to be the event's international ambassador for the second year and summed it up simply. "Friendly, welcoming and all smiles."

Mr Fernando has long been devoted to charitable, humanitarian and community programmes and had been impressed by the whole ideal of the Art Deco experience.

When Mrs Jackson put a presentation to him back in 2014 it was clear he was impressed.

He had heard about the great festival and said he had longed to attend it at some stage - taking on the mantle of ambassador put the wheels in motion.

Mr Fernando said was impressed that the event was run by a not-for-profit organisation and that any profits made went back into the community.

"It is just so great to have him as part of all this," Mrs Jackson said.

"It takes us to another level of international exposure."

She said the fact Mr Fernando and his company had invested so much time and energy into being part of the Tremains Art Deco Festival underlined his passion for it.

A popular sales item had been the special Art Deco designed tea caddies and Mr Fernando was happy to sign a few while he and his family were there.

There are four Dilmah-inspired events set to take place during the festival.

The Tea Inspired Me national photo competition in association with Canon is being staged at Creative Arts Napier in Byron St and will be open until next Wednesday, with the Fernando family set to announce the main winner today at about 12.30pm.

Tomorrow at 10am at the Tremains Marquee on the lower lawn off Marine Parade Merrill J, Dilhan and Malik Fernando will be joined by Global High Tea Challenge maestros Laurent Louudeac and Camille Furminieux as they create tea masterpieces.

Between 5pm and 6.30pm tomorrow is the The Dilmah Highwire Mixology Extravaganza, which will see some Dilmah tea-based cocktails prepared among the tasty sipping treats, at the old Daily Telegraph building in Tennyson St. On Sunday the Dilmah Hightail Tea Dance will take place as part of the Gatsby Picnic on the lower lawns of Marine Parade.
See original Post here